The Group of Twenty (G20) is a leading forum of the world's major economies that seeks to develop global policies to address today’s most pressing challenges. The G20 is made up of 19 countries and the European Union. The 19 countries are Argentina, Australia, Brazil, Canada, China, Germany, France, India, Indonesia, Italy, Japan, Mexico, Russia, Saudi Arabia, South Africa, South Korea, Turkey, the United Kingdom and the United States.

The G20 was born out of a meeting of G7 finance ministers and central bank governors in 1999 who saw a need for a more inclusive body with broader representation to have a stronger impact on addressing the world’s financial challenges. The G7 invited leading markets - both developed and emerging - to form a new ministerial-level forum: the G20.

In 2008, amidst the global financial crisis, the world saw a need for new consensus-building at the highest political level. Since then, the G20 summits have been attended by heads of state or government, and the G20 was instrumental in steering the course through the economic turmoil and in stabilizing the world economy. Since then, its agenda has expanded to include additional issues affecting financial markets, trade, and development. 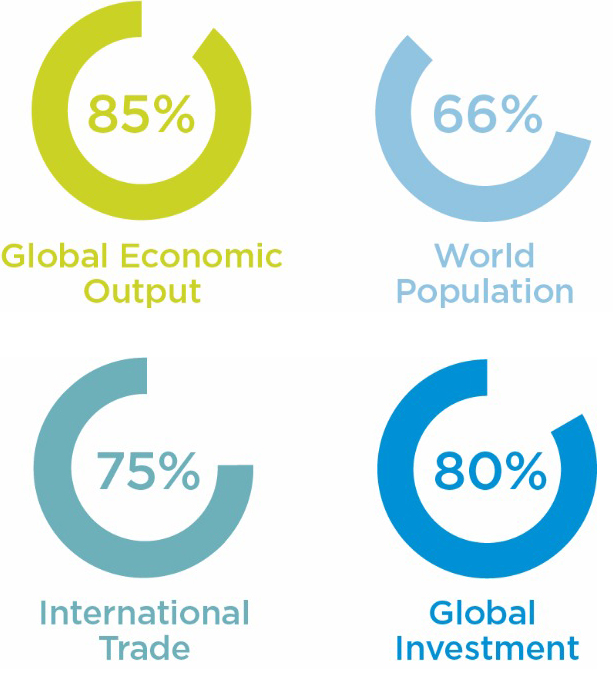 The G20's yearly agenda includes over 50 meetings of ministers, foreign ministry emissaries (known as sherpas), central bank governors, and world leaders. Each year’s agenda cycle culminates in the Leaders Summit attended by heads of state or government, where they issue a joint declaration on the policy formed by the G20 meetings throughout the year. For example:

The work of the G20 is generally divided into two tracks:

The presidency of the G20 rotates annually between the group’s 19 member countries.As the G20 has no headquarters or permanent staff, the country which holds the G20 presidency hosts the meetings and plays a leading role in setting the agenda and building consensus among members.

To broaden the scope and impact of the G20 and ensure its focus is truly global, leading international organizations, such the United Nations (UN), International Monetary Fund (IMF) and the World Bank, are invited to take part.

The G20 seeks to enrich its agenda and decision-making by drawing on perspectives and expertise beyond its member governments. It therefore confers with a set of engagement groups: civil society organizations from the G20 nations that represent different sectors of society. Each engagement group is independent and chaired by one of its national members. It develops a set of policy recommendations that are formally submitted to the G20 ahead of the summit.

Spain is a permanent invited guest to G20 meetings. Each year, the country which holds the G20 presidency also invites countries to attend at its own discretion. This year, Argentina has invited Chile and the Netherlands.

Countries which chair key regional groups - such as the African Union (AU), the Association for Southeast Asian Nations (ASEAN), and the New Partnership for Africa's Development (NEPAD) - are generally invited to the summit. This year these regional groups will be represented by Rwanda, Singapore, and Senegal, respectively. The Caribbean Community (CARICOM) has also been invited by Argentina for this year's G20, represented by Jamaica.

With a people-centred vision, Argentina is placing development, fairness and sustainability at the forefront of the G20 agenda. The presidency seeks to deliver on the task entrusted us by our fellow G20 members to lead the G20 under the theme “Building consensus for fair and sustainable development”.

Who we are defines our vision

Who we are, where we are and where we are headed to will shape the vision of our presidency. Argentina is a multicultural developing country where people from different origins, beliefs and religions coexist peacefully in a plural identity. We are a vast and diverse country in the south of the Americas. We are undergoing a transformational change. We strongly believe that a promising future lies in a deepening integration with the world.

Our presidency seeks to embody the expression not only of one country, but that of a whole region. Latin America and the Caribbean has much to contribute to the world order, through its talented human capital, its abundant natural resources, and as a region of peace and cooperation. We are bringing to the centre of the G20 the aspirations and concerns of this developing part of the world which, like Asia and Africa, has a vibrant and diverse population eager for new opportunities.

Our presidency focuses on three key issues: the future of work, infrastructure for development, and a sustainable food future.

Technological change is extraordinary in its magnitude and speed. The emergence of new technologies has led to the development of new forms of work that are rapidly changing production processes worldwide. This offers huge opportunities to accomplish fair and sustainable development; yet it also presents challenges that are putting pressure on the employment, welfare and education agendas.

Infrastructure is critical to development. Investment in infrastructure boosts growth and productivity. Moreover, infrastructure provides the physical and digital access necessary for our citizens to seize the opportunities of the future economy.

Despite its importance, investment in infrastructure is far less than what is needed to sustain vigorous growth and make it truly inclusive. The global infrastructure gap projected from now to the year 2035 amounts to USD 5.5 trillion according to some estimates. Meanwhile, institutional investors around the world have USD 80 trillion in assets under management, typically offering low returns.

Food security is an important link in the process of achieving stability and peace. In no other case are security and development more evidently interlinked and mutually reinforced as in food. Meeting the dietary needs of future populations requires a sustainable way of increasing agricultural productivity.

Gender issues play a significant role across the entire G20 agenda in 2018. True development must put an end to gender inequality and guarantee women’s digital and financial inclusion.

As a result of structural inequalities, public policies tend to have different implications for women and men. That is why the Argentine Presidency is fostering a gender mainstreaming strategy across the whole G20 agenda.

The only way to achieve truly fair and sustainable development is by ensuring that women and men will benefit equally from it. The G20 agenda in 2018 seeks to boost women's empowerment, the elimination of gender disparities in employment, science, technology and education, and protection from all forms of gender-based violence.

Finally, they will meet along with their respective heads of state or government at the Leaders' Summit on 30 November – 1 December.

Access the full calendar of the Finance Track here