Trade: An Engine of Growth for All

The high-level panel will discuss the role of trade in supporting global growth, and how governments can protect those that are left behind. Panelists will explore the interactions between trade, investment, and growth, including how global value chains may have changed the channels through which trade affects growth and complements other structural reforms. The panel will address a number of key questions. What are the next frontiers for trade policy and what is the best approach to undertake them? How can policymakers tackle adjustment burdens at the national level, and address protectionism at the international level?

Join the conversation via #IMFonTrade

Shawn Donnan leads the Financial Times’ coverage of trade and development globally. He previously served as World News Editor, coordinating the FT’s international economic and political news coverage. Prior to that he served as deputy world news editor. From 2006-2008 he was the FT’s deputy Asia news editor, overseeing the paper’s economic and political coverage of the region, and before that he was correspondent in Indonesia for four years. He holds a degree from Boston University.

The Honourable Chrystia Freeland is Canada’s 18th Minister of International Trade. She was first elected to Parliament November 2013 and re-elected in October 2015; in opposition she served as her party’s Critic for International Trade. Ms. Freeland received her undergraduate degree from Harvard University and continued her studies on a Rhodes Scholarship at the University of Oxford. She had a distinguished career in journalism before holding public office, serving as the U.S. managing director of the Financial Times, as a managing director of Canadian-owned Thomson-Reuters, and as editor of Consumer News. Her book Plutocrats: The Rise of the New Global Super-Rich and the Fall of Everyone Else (2012) won the Lionel Gelber Prize and National Business Book Award and was the basis for her 2013 TED Talk on global income inequality.

Douglas Irwin is the John Sloan Dickey Third Century Professor in the Social Sciences in the Department of Economics at Dartmouth College. He is a Research Associate of the National Bureau of Economic Research and previously served on the President's Council of Economic Advisers and the Board of Governors of the Federal Reserve System. He holds a bachelor’s degree from the University of New Hampshire and both a master’s degree and Ph.D. in Economics from Columbia University. 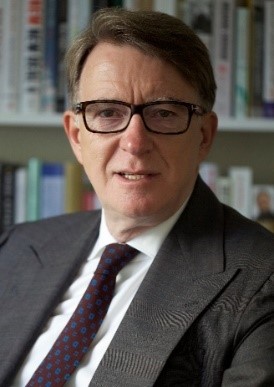 Lord Mandelson was the European Trade Commissioner from 2004 to 2008, during which he negotiated trade agreements with many countries and led European negotiations in the WTO Doha Round. Between 1997 and 2010 he held a number of posts in the British Government, including Secretary of State for Trade and Industry, Secretary of State for Business, Innovation and Skills, and British First Secretary of State. In 2015 Lord Mandelson became President of the Great Britain China Center, a non-departmental public body that encourages dialogue and collaboration between Britain and China. He became Chancellor of Manchester Metropolitan University in June 2016, and also serves as President of the Policy Network think tank and Senior Advisor of Lazard International.

Ernesto Zedillo is Director for the Study of Globalization and Professor in the Field of International Economics and Politics at Yale University. Before that, he was Chairman of the Global Development Network, and served on several prominent commissions including the Commission on Growth and Development. He was President of Mexico from 1994-2000, and before that held several ministerial portfolios. He holds a Ph.D. from Yale University.

With protectionism on the rise and the risk of an anti-trade narrative taking root, the heads of the WTO, IMF and World Bank Group opened the seminar emphasizing how trade promotes innovation, employment and higher living standards, and urged policymakers to build public support for open trade policies. Panelists then discussed the role of trade in supporting global growth, and how governments can protect those that are left behind.

- Rise of protectionism and anti-globalization rhetoric. Irwin compared the current trade environment to the outbreak of protectionism in the early 1980s. The difference, however, is the increase today in what he calls “covert protectionism” – subtle nontariff measures, such as local content requirements, subsidies and health and safety regulations. These pose a greater risk to the trading system as they are harder to identify. Freeland thought the surge in trade barriers was more akin to the Great Depression and the real danger is to assume policymakers just need to ‘sell the message’ and address misconceptions about trade. The anger those ‘being left behind’ are expressing is real but is directed to more than just trade policy. Their complaint is about a bigger ill, namely inequality. Mandelson agreed, but added there’s also a strong anti-globalization element. Irwin argued Brexit and the rise of Trump are being driven by a growing cultural divide that is not so much anti-trade as it is antiimmigration.

- Multilateralism. Zedillo disagreed with the suggestion in the WEO to bring nontariff issues, e.g. regulation and competition to the WTO. Rather than ‘multilateralize’ every issue, countries – EMDCs in particular – should move offensively and take unilateral action. Irwin agreed, arguing countries can do a lot to improve trade without engaging at a multilateral level, for example India’s economic reforms of 1991. Mandelson acknowledged multilateral trade negotiations have become “too big not to fail” but are needed to exert pressure. In that respect, the failure of TPP would 37 be a significant setback for those countries and reformers that have taken a progressive approach to liberalization.

- Coordination. Zedillo argued the Fund needs to be more assertive in criticizing the G20 for its failure to coordinate macroeconomic policy. Mandelson strongly agreed, noting policy coordination is essential for growth.

- Role of domestic policy. Zedillo argued that trade and globalization were being used as scapegoats by politicians to evade responsibility for failed policies and regressive taxes. In that respect, the real ‘sword of Damocles’ hanging over trade was the prospect of a Trump presidency. Irwin agreed, and noted that trade adjustment assistance had not worked well in the US. However, there is bipartisan support for the earned income tax credit, which if expanded, could have important redistributive effects. Freeland emphasized the effectiveness of policies aimed at strengthening the middle class, such as redistributive tax policy. In Canada taxes have increased for the top 1% to pay for programs for the middle class. Similarly, programs are being unrolled to assist small and medium sized businesses to identify export opportunities. These have strongly impacted public perceptions of openness and trade.

“Trade is a relatively minor cause of job loss. The evidence shows that well over 80 percent of job losses in advanced economies are due to increased productivity through technology and innovation.” Roberto Azevedo, Director-General, WTO

“I think the lessons of history are absolutely clear on this. The last quarter century has seen the greatest reduction in poverty we’ve ever witnessed in human history, and at the risk of offending my host, it wasn’t because of the World Bank, it was because of trade and economic growth.” Douglas A. Irwin, Professor in Social Sciences, Department of Economics, Dartmouth College

“The 21st century globalized, technology-driven economy isn’t working for a lot of people, and is not delivering for our middle classes and the people who are working hard to join the middle class.” Chrystia Freeland, Minister of International Trade, Canada

“If I know that my country can attract more foreign investment and insert itself more actively, dynamically and more productively into this new fantastic world of global value chains, why am I not doing more myself to be more competitive? Why do I have to wait for TPP to do it?” Ernesto Zedillo, Former President of Mexico

Trade: An Engine of Growth for All